The Hill We Climb by Amanda Gorman 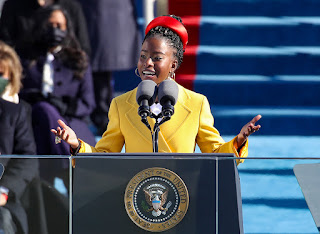 When day comes we ask ourselves, where can we find light in this never-ending shade? The loss we carry, a sea we must wade. We’ve braved the belly of the beast. We’ve learned that quiet isn’t always peace. In the norms and notions of what just is isn’t always justice.

And yet, the dawn is ours before we knew it. Somehow, we do it. Somehow, we’ve weathered and witnessed a nation that isn’t broken, but simply unfinished. We, the successors of a country and a time where a skinny Black girl descended from slaves and raised by a single mother can dream of becoming president, only to find herself reciting for one.

And so, we lift our gazes not to what stands between us, but what stands before us. We close the divide because we know, to put our future first, we must first put our differences aside. We lay down our arms so we can reach out our arms to one another. We seek harm to none and harmony for all. Let the globe, if nothing else, say this is true. That even as we grieved, we grew. That even as we hurt, we hoped; that even as we tired, we tried; that we’ll forever be tied together, victorious. Not because we will never again know defeat, but because we will never again sow division.

Scripture tells us to envision that everyone shall sit under their own vine and fig tree, and no one shall make them afraid. If we’re to live up to our own time, then victory won’t lie in the blade, but in all the bridges we’ve made. That is the promise to glade, the hill we climb if only we dare it. Because being American is more than a pride we inherit; it’s the past we step into and how we repair it. We’ve seen a forest that would shatter our nation rather than share it, would destroy our country if it meant delaying democracy. And this effort very nearly succeeded.

But while democracy can be periodically delayed, it can never be permanently defeated. In this truth, in this faith we trust, for while we have our eyes on the future, history has its eyes on us. This is the era of just redemption. We feared it at its inception. We did not feel prepared to be the heirs of such a terrifying hour, but within it, we found the power to author a new chapter, to offer hope and laughter to ourselves.

We will not march back to what was, but move to what shall be: a country that is bruised, but whole; benevolent, but bold; fierce and free. We will not be turned around or interrupted by intimidation, because we know our inaction and inertia will be the inheritance of the next generation. Our blunders become their burdens. But one thing is certain, if we merge mercy with might, and might with right, then love becomes our legacy, and change our children’s birthright.

Popular posts from this blog

September 18, 2019
Women Under The Influence , a community celebrating trailblazing cinema directed by women is  hosting a new film festival:   WUTI goes IdyllW ILD   Sept 20-22  The weekend is packed with  groundbreaking classics , cutting edge new films, director conversations, expert panels, community, carousing, and so much more with KAREN O,  PENELOPE SPHEERIS,  KIMBERLY PEIRCE, DIANE WARREN,  EMMA ROBERTS,  JANICZA BRAVO,  BARBARA KOPPLE,  ALEX PRAGER,  VIVA, and  ALIA SHAWKAT to name but a few!  There will be free childcare on Saturday, WUTI is dog friendly and has ride share options! Excited about building the bonds between the women filmmakers in Los Angeles,  they would love to extend an invitation to the festival with a special discount code: If you get your ticket HERE add the discount code: directorsinthepines Idyllwild is 2.5 hrs from LA so grab a cabin and get  onboard!  Tabitha x TABITHA DENHOLM   WOMEN UNDER THE INFLUENCE @WOMENUN
Post a Comment
Read more

Sign the petition! The Alliance of Motion Picture and Television Producers: Tell AMPTP to Give Behind-the-Scenes Workers a Fair Deal